skip to main | skip to sidebar

At 5 days old, my surviving singleton puppy from Gambler x Kila traveled 6 1/2 hours south to Oregon to join the Brownstone Chinook litter that is only 2 days older than she.  The dam of that litter, Koyuk, was very accepting of Miss Silver and she is already benefitting from the competition to eat and the extra exercise and socialization that comes with siblings. 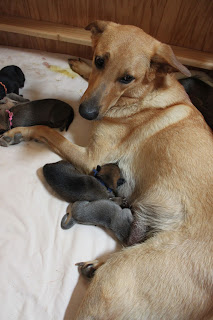 Koyuk is much like her aunt Cornelia Marie and her granddam Chili- a natural mother.  This breed seems to be very pack oriented in terms of puppy raising.  My Chinooks (and my Water Spaniel) often do communal raising of pups and all lactate and feed pups- no matter who the dam is. 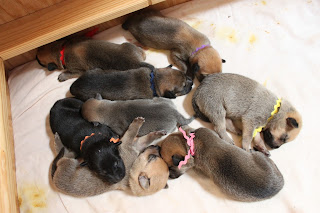 Miss Silver looks quite content with her new brothers and sisters 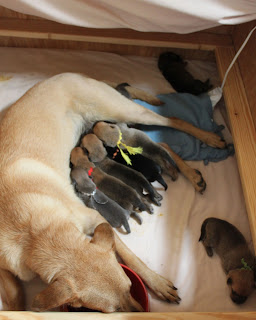 Getting in to get a drink is much harder with 7 other pups but good for puppy development to push and exercise muscles.
Future puppy updates can be seen on the Brownstone blog http://brownstonechinooks.blogspot.com ﻿
Posted by Moonsong Chinooks at 4:36 PM No comments: 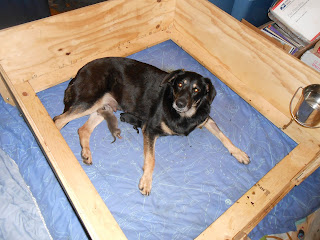 Kila had a very difficult pregnancy and an even more difficult delivery.  After going into labor, she produced 3 stillborn pups.  Labor then stopped.  After a few hours we were off to the vet for an emergency csection.  On the way to the vet, Kila developed eclampia/hypocalcemia and could not even stand up.  IV calcium and a csection later, Kila produced 3 more pups- one stillborn and 2 live females. 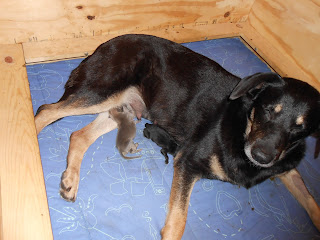 Kila with Miss Silver and Miss B&T.  Miss B&T was only 6.5 ounces at birth- tiny!!!  She took a long time to revive after the csection but seemed vigorous the first two days. 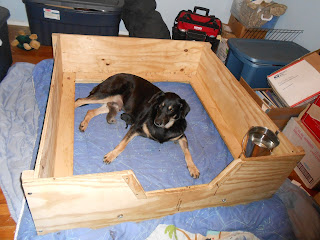 Overnight day 3, Miss B&T started to fade and despite our best efforts she passed away. 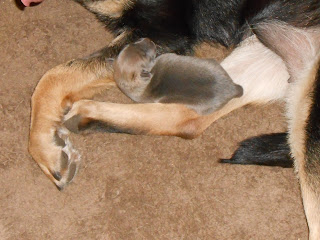 Miss Silver continues to do well and is getting chunky. She has doubled her birth weight on day 4! 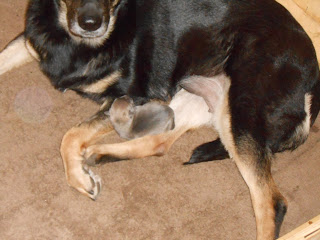 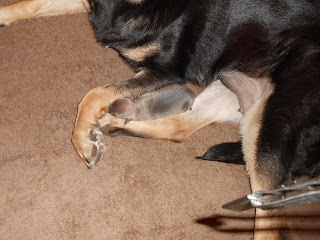 Kila has been very sick but is still a good mom 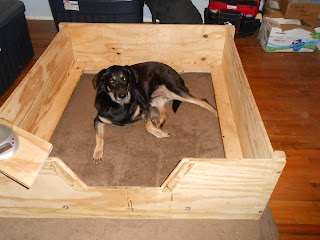 Posted by Moonsong Chinooks at 8:02 PM No comments: 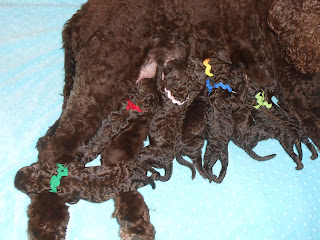 Faethe produced 8 beautiful pups on July 17th.  There are 6 males and two females. Pups are doing great.  You can keep up with the litter at http://moonsongfaethejoey.blogspot.com

Posted by Moonsong Chinooks at 7:31 PM No comments: 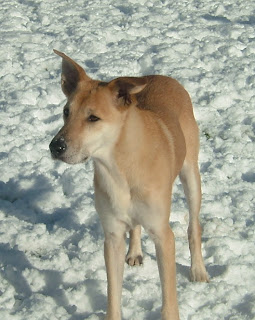 I am very sad to announce Tullibardine Red Sparkle crossed the Rainbow Bridge weds, june 19th after a long battle with kidney failure.  Her whole body started giving out and when she started hiding under the porch away from me and the pack, I knew it was time.  She passed very quickly and peacefully at the vets office.  Sparkle did not join the Moonsong pack until later in life- she was 8- but she came in and joined our house like she had always been there.  She bonded to my dogs and was almost instantly bonded to me.  She loved me as much as the dogs born here and was very loyal, obedient and was  very reliable off leash.  she followed me everywhere but was quite sweet and friendly to strangers, especially children and loved other dogs.  She was just an overall wonderful girl and a great ambassador for the Chinook breed. 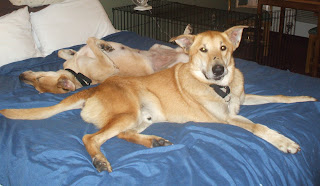 Here is Sparkle lounging on the hotel bed the day I picked her up from a farm in South Dakota.  She had ben boarded there for a day after some other Chinook owners transported her from Manitoba to Dakota. Sparkle is the belly up Chinook behind Mr. T-Bone who traveled down from Manitoba with Sparkle in order to live in Seattle.  Obviously being uprooted from her home, traveling to another country and meeting new people and dogs did not really disturb Sparkle that much. 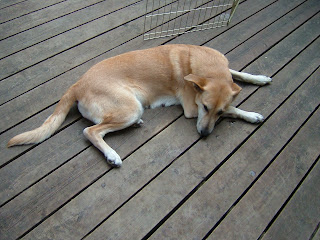 Sparkle loved to lay out on the porch and soak up the sun and fresh air.  She could look dignified but... 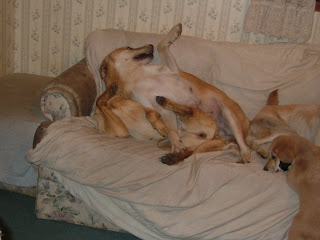 ...most of the time she was quite the goofball.  She loved to play with the other dogs.  Here she is wrestling and rolling around with Honey. 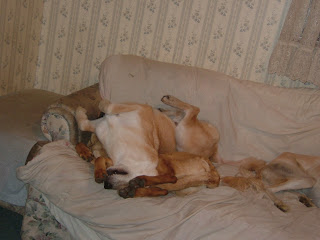 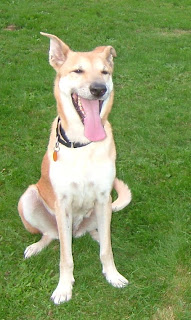 Sparkle had quite the Chinook smile.  Just calling her "Miss Sparks" was enough to get her smiling.  She had a great loving expression where she would close her eyes and smile and wiggle her butt and rub on me like a cat.  She gave great little kisses 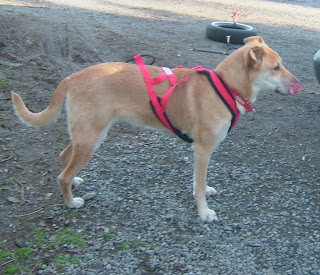 Sparkle enjoyed working under harness but an xray showed an old broken hip that limited how much running she could do while pulling a lot of weight.  She was able to scooter with the other dogs and do some sledding but weight pull was out. 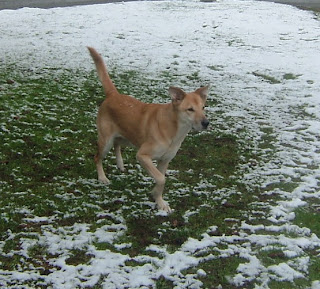 Sparkle was on a mission

Sparkle took it upon herself to seduce a couple of my boys while having a silent heat soon after arriving at Moonsong Chinooks and produced a litter that included both purebred Chinooks and Saluki x Chinook crosses.  Here she is relaxing with my Irish Water Spaniel who had a litter on the same day as Sparkle. 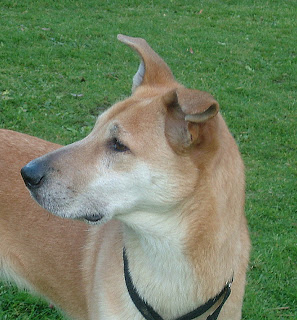 Sparkle had a very handsome face 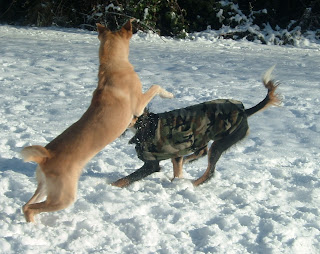 Here is Sparkle playing with Pagan- I should have seen trouble coming!  He was only 8 months old but obviously willing and able to help Sparkle produce some Chalukis. 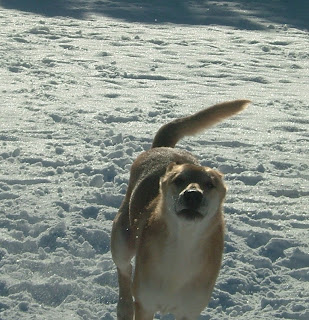 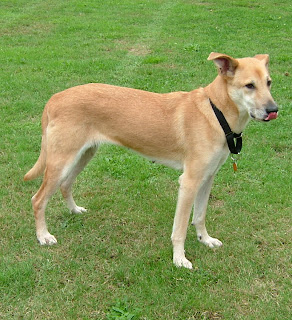 Sparkle was a good sized girl and very impressive in appearance and attitude in person. 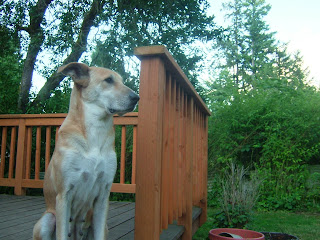 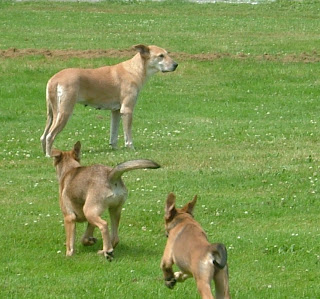 Sparkle with two of her pups playing in the field.  She was a good mom and she never looked better than the several months following the birth of her pups.  Motherhood was her happiest task and she helped care for other litters born at Moonsong Chinooks like they were her own- even lactating to help nurse.
Sparkle was a big cuddler. Godspeed Sparkle, you will be missed 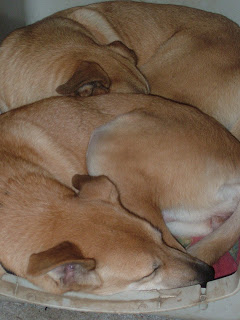 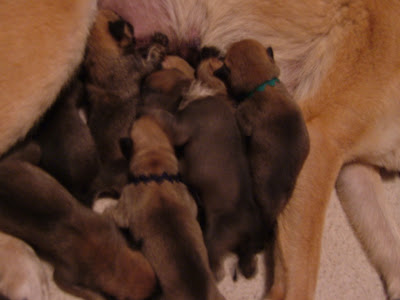 Cornelia Marie welcomed 9 puppies into the world on tuesday.  The proud papa is the very handsome Sandhill Ranger.  you can see pics and updates on the litter at http://moonsongcornelialitter.blogspot.com
Posted by Moonsong Chinooks at 3:29 PM 1 comment: