skip to main | skip to sidebar

The Sci Fi litter is here! 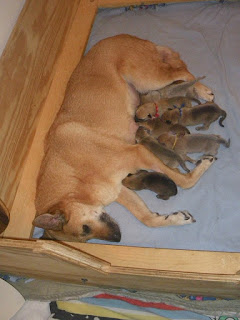 The Moonsong Sci Fi litter has arrived! This is the second and final litter for Moonsong Cornelia Marie.  The sire is Moonsong Secret Squirrel.  The pups and parents can be seen on the litter blog www.moonsongscifi.blogspot.com
Posted by Moonsong Chinooks at 3:36 PM 14 comments: 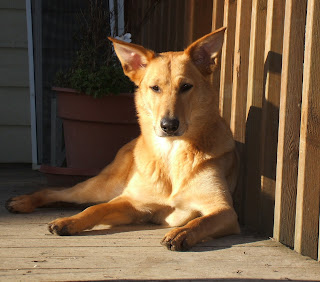 The worst part of loving dogs is losing dogs.  I have had to write memorials in the past and each time the words have flowed out of me.  I was able to capture the essence of what made that dog special to me but this time I find myself at quite a loss.  How do you capture the spirit of a dog that was such a force of nature? A dog that never gave in to anything or anyone, even me.  Loving Chili was like loving a wild animal- unlike any other dog I have owned, I know her love for me was her choice. Every time she listened to me, it was because she decided to- you could not force Chili to do anything- she was afraid of nothing.  You couldn't bribe her either- trying to offer her a treat to perform a task resulted in a look of disgust.  As a dog trainer, she humbled me like no dog has ever humbled me. I know her success in obedience, under harness, and in the show ring was not affected one whit by my ability in training but was solely Chili's own will and desire to win at life.  In spite of her intelligence, fearlessness, lack of respect for the will of humanity, Chili was quite a social dog.  She liked attention- it was a way for people to pay homage to her- but she did not require it for her happiness. She liked children most of all and was very comfortable around other dogs. Her death leaves a huge hole not just in my heart but in the world. 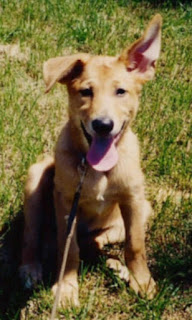 Chili had attitude from the moment she was born.  Her breeder had her picked out for me as soon as she started shooting around the whelping box.  At 8 weeks, Chili went to stay with some long time Chinook breeders until I could meet them at a dog show a month later to pick her up. They contacted me the day after they picked her up to prepare me for what I was getting. They said she was the smarted dog they had ever seen and calling her a handful was a vast understatement.  As soon as I met her, I knew we were going to have quite the journey together. 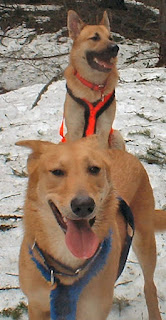 Chili with her longtime pal and future sire of her first litter, Brett. Chili was a fast and powerful sled dog but could not run solo lead.  She was smart enough but her fearlessness lead her to make some questionable decisions, like trying to lead the team over a pretty sheer cliff and into water.  The other dogs would follow her anywhere- no matter what they thought of the obstacle in front of them, Chili's will instantly convinced them they could just run down the mountain side and could swim across the river dragging the sled.  Putting her with a more "reasonable" dog created an enjoyable sled team. 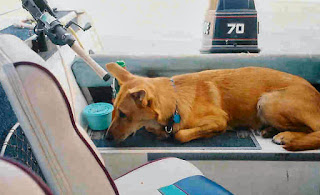 Chili enjoying a day of fishing with me at my parents camp in New York.  Chili was up for any adventure. 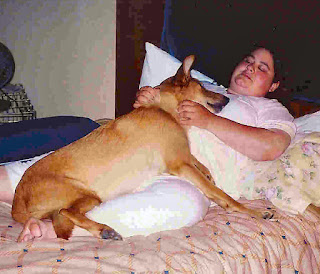 Chili was not often a cuddly dog but had her moments. 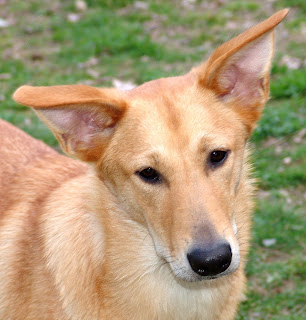 I loved Chili's eyes.  They were so dark and wise looking.  People were always asking me if she were part Dingo or coyote- she had such a spirit of wildness about her 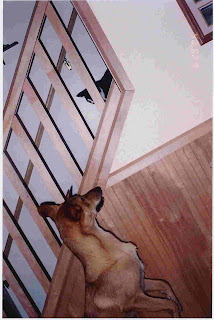 Chili playing with the family cat 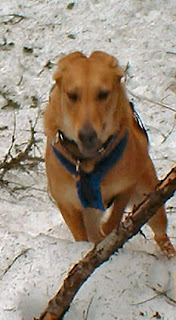 Most of my pictures of Chili are action shots.  Life was too short to stand still very long.  Chili was very active but I would not call her hyper- she always had a purpose for moving. 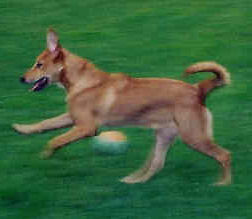 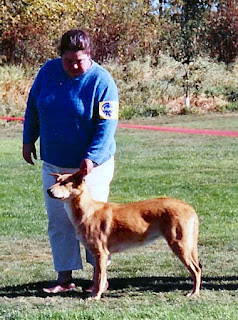 Chili loved showing.  She was not what I would call the "typiest" Chinook but she won a lot and easily finished her Grand Championship. Judges couldn't help rewarding her attitude- she thought she should always win, so win she did!! 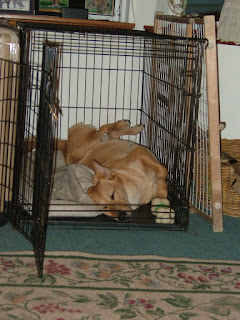 Chili's favorite sleeping position was belly up and twisted to the side.  This is how she slept almost every night. Even in sleep she was a character. 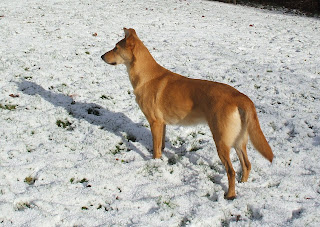 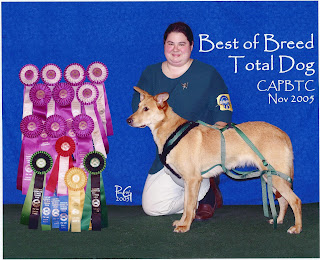 All of these ribbons were from one weekend of Chili showing in conformation and competing in a weight pull competition.  Chili pulled over 2000lbs and even then I pulled her from the match because I did not want her to overdo it.  I did not trust her to quit before she hurt herself.  In a future pull match, she would pull over 2500lbs.  She was strong in more than just will!! 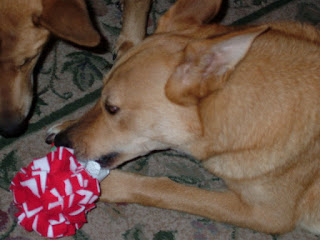 Chili was not particularly toy motivated but would occasionally lower herself to jump in and play with the other dogs.  The other dogs LOVED when Chili would play with them. They would wiggle and squeek and be besides themselves with joy. 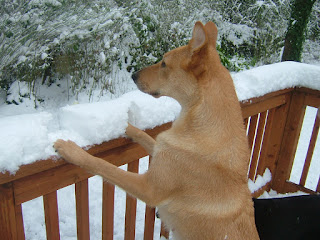 Hmmm.... what's going on out there. Knowing Chili, she jumped off the porch by going over the banister right after this picture was taken. 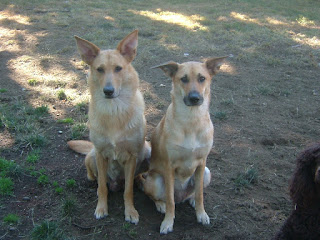 Chili with her pup, Cornelia Marie who was born at my house and never left.  Cornelia is a lot like Chili in her loyalty but is much softer and cared a lot more about what people think. 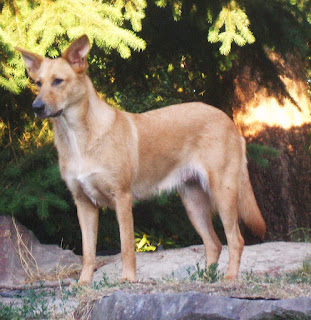 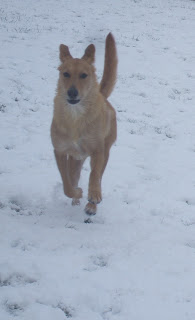 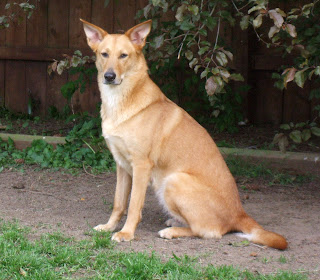 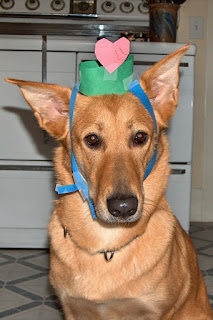 Chili loved kids and was very tolerant. She stayed at a stud owners house for a few days while we were attempting a breeding and the child in the house made her paper hats and played dress up with her.  Even though I did not have kids and she was rarely around kids, she had a natural affection for them. 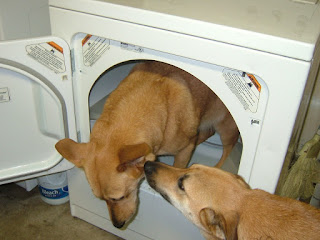 For her third and final litter, Chili decided she wanted them born in the dryer. When I put a stop to that, she decided she would have them outside.  She always wanted to have her pups outside and would lie in the whelping box refusing to cooperate in having her pups and then would pop one out as soon as I took her out to potty.  She had puppies all over my yard and porch but rarely in the whelping box. 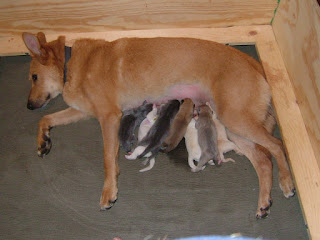 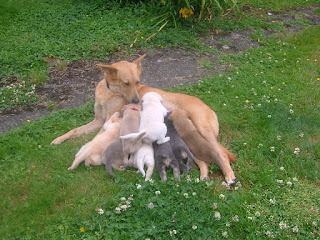 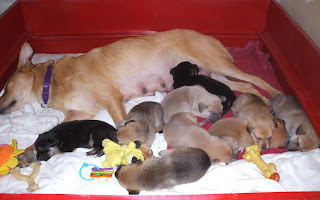 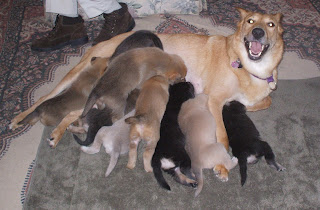 Chili was an easy breeder, an easy whelper, and a wonderful mom.  She loved having puppies and I am glad to see her pups grow up and produce litters of their own for a number of Chinook breeders.  It makes her passing easier knowing she lives on through her pups, grandpups,  and great grandpups. 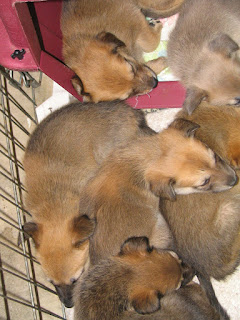 Chili's first litter was my NFL Quarterback litter.  The pups were sweet, wonderful dogs and this picture from the litter was my Christmas greeting for many years. 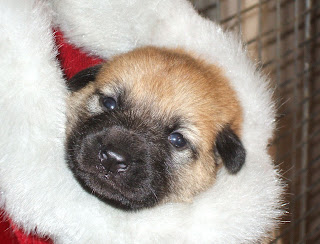 God speed Chili.  Saying I will miss you, that I love you, is not enough but it is the best I can do. Our journey together changed me for the better
Posted by Moonsong Chinooks at 3:22 PM No comments: